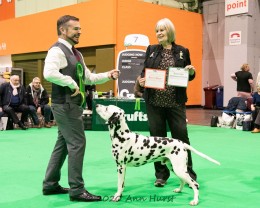 Best of Breed winner at the Crufts 2020 show was Dvojica Vendetta, Dunnachie

View The Latest Show
View All Shows
Dalmatian Club Members
Members Area
The club now has a secured dedicated area of the website for members only. Club members will have received a letter explaining how to login and use the members area.
Latest News
CRUFTS 2020 RESCHEDULED
The Kennel Club have today announced that CRUFTS 2020 is to be rescheduled. Utility day will now be 16 July at the NEC

AMMENDMENT REGARDING CHRISTMAS MESSAGES
Members’ Christmas messages for the December issue of Spots of News can be sent direct to the Editor, Mrs Lin Probert either by email lin.probert@gmail.com or posted to her at Holmewood, Reddings Lane, Staunton, Coleford, Glos GL16 8NZ to be received by:-

CANCELLATION OF CLUB CH and JOINT CH SHOWS
Due to the ongoing difficulties and restrictions with regard to events and COVID, the Committee has regretfully decided to postpone the rescheduled Club Ch Show which was due to be held on 6th February 2021. The Committee appreciates More...